Menu
My Trip to Haridwar and Rishikesh-Beautiful places in Uttarakhand An Awesome trip to Haridwar and Rishikesh-Stunning scenery

How to reach Haridwar?

Once out of city road, I started to drive on the newly built Delhi-Meerut expressway for the first time. It has eight lanes on a nicely built stretch of 96km. It directly took me to NH334 bypassing the city hustle-bustle of Muradnagar and Modinagar. Furthermore, the new bypass road for Roorkee and a few flyovers between Roorkee and Haridwar have made it easier to reach Haridwar from Delhi.

The highway after the Delhi-Meerut expressway has ample food joints between Meerut and Haridwar. The variety is full of choices for every kind of tastebud. It has multinational brands selling pizzas and burgers to desi multinationals like Haldiram and Bikanerwala selling Indian cuisine. It has CCD for coffee lovers and kullad chai(earthen pot) stalls for tea enthusiasts. Moreover, I have covered only a small part of the entire available variety of food here; the rest of it is available at numerous local highway dhabas. Some of the dhabas are big enough to look like a mini-market.

Arrival at Haridwar: Introduction to trip to haridwar and rishikesh

The car took me to Haridwar in 4 hours with modest speed and one stopover to catch some shacks and a cup of tea. The new expressway reduced my journey time to Haridwar by a good one hour.

Uttarakhand is full of famous religious places. Haridwar is a gateway to reach these places on hills from the planes of north India. The name was ‘Hari Ke Dwar’ in ancient times, which later changed to ‘Haridwar’ for convenience of pronunciation. ‘Hari’ is one of the names of the god Vishnu, a principal deity for Hindus. This ancient city is one of the seven sacred cities for the Hindus and is a major pilgrimage center.

Haridwar is also important as the holy river the Ganges exits the Shivalik foothills to land on planes in this city. From here, the river embarks on a relentless journey until merging into the seawater at the Bay of Bengal. I was surprised to see the clean and pure water of the Ganges at Haridwar.

The river water was aqua green and I felt like a kind of green-blue light is emitting from the water. I spent hours walking in the lanes and by-lanes near ghats. I noticed that the aqua green light is visible only in the afternoon when the rays of the sun were straight on the surface of the river water. Someone told me that this phenomenon happens only in a few months of a year. For the rest of the year, it is usually transparent and clean.

The famous ‘Hari Ki Pauri’ in my trip to Haridwar and Rishikesh:

‘Hari ki Pauri’ is the main ghat or area and the most attractive one in Haridwar. A convenient government-operated car parking is available at the side of the highway and some 200 meters away from the riverbank. It is also the main landmark of the city. The literal meaning of the name is, ‘Hari’ means ‘God’, ‘Ki’ means ‘is’ and ‘Pauri’ means ‘steps’.

It has colorful temples and so many in numbers; it has multiple water channels coming from the north and amalgamating around Hari-Ki-Pauri. It has shops selling beautiful artifacts mostly made of copper and brass. Some are selling Pooja samagri or the material used in worship. Devotees from different parts of the country are taking a holy dip in the river in one corner.

A few others are busy with prayer and rituals on the other. Some are meditating sitting on the steps of the riverbank. The entire area is a true kaleidoscope of Indian culture. Every nook and corner of the place is full of life. 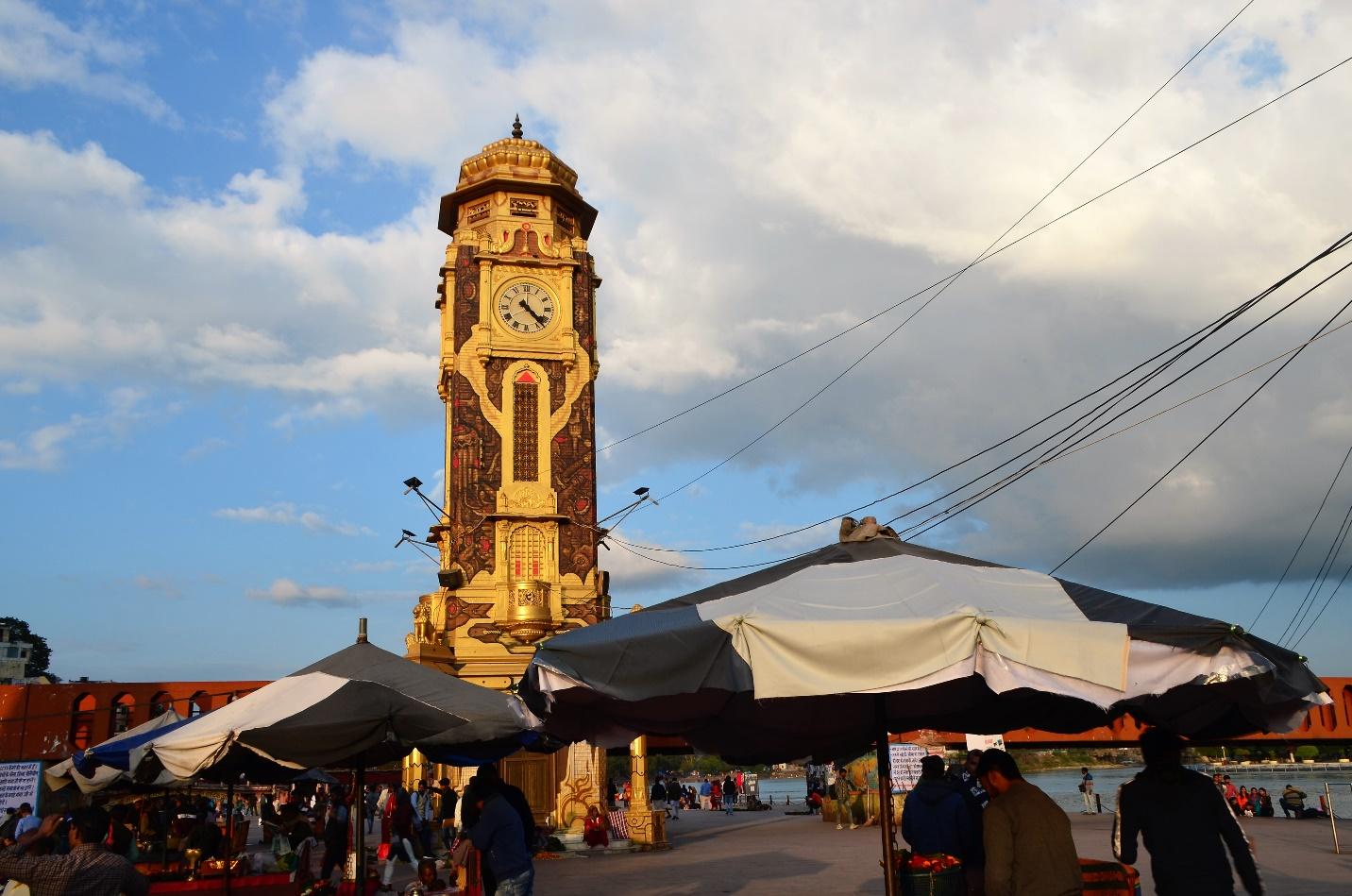 A striking clock tower in the middle of the Malviya Dweep adds to the beauty of ‘Hari Ki Pauri’. This marvel of architecture catches the eyes of visitors from a distance. The clock tower was built in 1938 and is known as Raja Birla Ghanta Ghar or Raja Birla Clock Tower.

The name is so because Raja Baldev Das Birla of Pilani from Rajasthan built it. It is a four-sided structure and has a clock on each side. It stands in utmost grandeur on the riverbank in ‘Hari Ki Pauri’. People assemble near the clock tower at sunset to witness the grand Ganga aarti performed every evening.

Entire area is a delight for street or candid photographers. It kept me busy for hours clicking photographs, walking, and looking for a few good compositions. These ghats are in an area of around 2 km. The area of the riverfront and around are clean and tidy. The water was already sparkling clean, so spending time on this stretch is a pleasure. One can sit on the steps and enjoy the soothing sound of a babbling stream. Beyond Hari ki Pauri, other ghats were clam and almost empty.

Concluding my visit to Birla Tower

Moreover, the ambiance around me forced me to halt for a moment and relish the tranquility of the moment. Those 30 or so minutes was an experience of a lifetime. The length is full of subjects and compositions to shoot. Surprisingly, all the habitation has happened on the other side of the river only and one side of it left barren. There is a walkway bridge to cross the river stream every few hundred meters. Therefore, it is convenient to hop from the empty side to the habited side and vice versa. Vishnu Ghat, Ram Ghat, Kusha Ghat, Singh Dwar Ghat are other famous areas to visit.

Visiting Ram Ghat in my trip to Haridwar and Rishikesh:

My next destination was Ram Ghat, which is around 1 km from Hari Ki Pauri. I relished the walk as I got a good view of the river and some nice compositions to shoot. When I entered, the main area of Ram Ghat leaving the riverbank behind, I noticed that the narrow lanes here are much like the famous lanes of Banaras. Both the cities have too many similarities. They are ancient, sacred, and famous Hindu pilgrimages. Both are situated on the banks of the river Ganges.

Ram Ghat area looks to be part of the old city of Haridwar. The houses there have a period look and design. Most of the houses are built using stone slabs and lime mortar. The architecture in this part of the city was very different from modern-day cement-only houses.

Time flew by and it was time for the sun to set in the crimson sky. The atmosphere got more attractive at the time of sunset. The water turned orange from light blue. Then slightly changed to purple-blue, which darkened with every passing minute.

I got this twilight shot keeping the camera on a tripod with a little longer shutter speed. I had absorbed a lot from the magnetic atmosphere of this place in the last few hours. Now, it was time to relax and rejoice. At Ram Ghat, I got a nice room right on the riverbank to rest and reclaim energy for the next day’s voyage. I got up in the morning with the auspicious sound of temple bells. It was time to move to my next destination-Rishikesh.

Finally reached Rishikesh-Concluding my trip to Haridwar to Rishikesh

Rishikesh is hardly 30 km away from Haridwar. Rishikesh is very close to the hills. The river Ganges leaves the Shivalik Hills in the Himalayas range and flows into the vast plains of north India. Unlike Haridwar, Rishikesh is abuzz with travelers and traffic. I had to spend time looking for a car park there. Temperature is a couple of degrees lower than what I experienced in Haridwar yesterday. October to February are the best months to visit Rishikesh.

The main attraction of the city is Lakshaman Jhula or the Lakshman Bridge. It is a 137-meter long and 6 feet wide suspension bridge built in 1929. It is believed that Lakshmana, the younger brother of Lord Rama, crossed the river on jute ropes at the same place where the bridge stands today.

Now, the bridge is closed for usage and a new bridge will be built parallel to it. Rishikesh has other suspension bridges, i.e. Ram Jhula and the newly built Janaki Bridge. All the bridges connect the planes of Rishikesh to the hilly side of it.

Know more: off beat things to do in goa

Laxman Jhula got into the limelight in 1968 when members of the Beatles group walked the bridge to reach the spiritual camp of Maharishi Mahesh Yogi. The bridge was barely 1 km from the main road where I parked my car. It was easy to find the bridge as all the lanes, by-lanes, and people were heading towards this bridge only. Lakshman jhula bridge is beautiful.

At first sight, I could not believe that the bridge is around 100 years old. This is a true marvel of engineering. It must be very difficult to make a half a kilometer-long bridge hanging with cables in hilly terrain so long ago. The tall and wide temple seen on the other side of the river is ‘Triambakeshwar Temple’.

I walked the bridge and reached the other side of the river. Another five-minute of walk-in narrow lanes took me to the riverbank. The area was calm and empty. While walking on the sand of the riverbank, I got a good view of Lakshman Jhula Bridge.

On the riverbank, I saw this man from some European country sitting on the sand and deeply engrossed in meditation. He must be a disciple of one of the many ashrams or spiritual centers in the city teaching yoga and meditation. Many foreigners stay in the city for a long to understand Indian mythology. West is always fascinated by Indian culture and tradition and wants to know more about it.

Janki Bridge: Best scenic part of my trip to Haridwar and Rishikesh

The new bridge was inaugurated in Dec 2020 and the construction took seven years to complete. It is a 346-meter long and 12 feet wide suspension bridge used by pedestrians and two-wheelers. The bridge is gigantic and two and a half times bigger than the old Lakshman Jhula Bridge. Distance between both the bridges is 2 km. I found that the area around Janki Setu is quiet and sparsely populated. This makes the place good to roam around or spend some time sitting on stones scattered on banks of both sides of the river.

Shivpuri in Rishikesh: River rafting in trip to Haridwar and Rishikesh

My next destination in Rishikesh was Shivpuri. It too has a suspension bridge similar to Laxman Jhula Bridge. This place is famous for its picturesque landscape and white river rafting. Shivpuri is 20 km from the city center and the approach road will give a feel of driving on hills. However, no worries as no special driving skills are needed to reach Shivpuri. The road and the river stream run parallel to each other until Shivpuri. You can go further and explore locations like Lansdowne, Devprayag, Rudraprayag, etc. These are beautiful places and within a range of 140km from Rishikesh.

While sitting on the riverbank and admiring the splendor of nature, I saw some colorful rafts zipping through the stream in front of me. People in the raft were struggling to keep it afloat whenever a rapid approach. Rapid is a spot in the stream with noisy turbulent shallow water. I got a few good shots of people enjoying rafting.

The water was ice-cold and putting my feet in it for a few minutes sucked tiredness of the entire day.  Sun was going down and it was time for me to leave the tranquility and go back to the chaos of the city life.