Duggal Bhitta a charming valley of Garhwal, located at a distance of about 230 Kilometres from Haridwar. The spectacular mountain views coupled with bird sighting makes it a very special spot for nature lovers like us. A huge number of people visit the place every year for different purposes. It’s a gateway to the famous trekking routes of Tunganath and Deoria Taal. 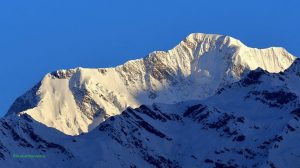 In every bush, waterside shrubs or large trees here, there is a movement. Just watch minutely and definitely there is some tiny colourful feather inside. Look beside the thin stream, you will see birds on the mosses, on the pebbles and even inside the darkness of the humid undergrowth. Our stay was booked at Negi’s Eco Hut and believe me, it was one of the best for bird campers. Location of our hut was just by the cliff which was an additional advantage for us.

The early morning was full of different bird calls. Flowering time of Rhododendron in the hills become a festive time for the birds. Starting from its rich nectar, insects, its tender parts all draws birds like Sunbirds, Tits, Flowerpeckers, Flycatchers etc at a time and the trees becomes their feasting places. On one side of the courtyard there was a Himalayan Bulbul (033) very common bird of Himalayas. Just behind the grasses some dark colour birds were foraging on the ground and those were Black Francolin (034). A very very shy bird. Just a mild sound occurs and they are gone.

This is also a pheasant bird but smaller in size. Mostly live inside bushes, very shy and secretive in nature and whole day forage on the cultivation grounds in search of food. The male birds are colourful, bright and the females are subdued. They are available in the entire South Asia and under Least Concerned  as per IUCN list.

A Grey winged Black Bird (034A) was on a pruned tree branch.

Unlike these shrub dwellers, the big trees like Rhododendron are shelters for so many colourful birds. Those birds move from place to place in search of food and any place suddenly found in abundance of food invites variety of birds at a time. The beauty of the snow covered peaks from closest points was our added flavour to the trip, however the extraordinary view of Rhododendron made us spellbound. One thing we came to know for the first time that the red Rhododendron of lower altitude gets rosy pink as the altitude increases. We could take some photos of them too. 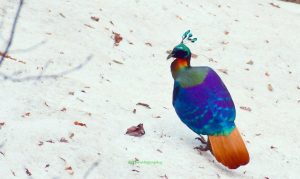 We travelled to a higher point towards Ukhimath. Trekking was the only option as road was closed due to snow. It was utterly cold up the slope. The road sides and forest floors were covered under thick snow and saw some birds at a distance. Most precious and beautiful bird of the Himalayas, Himalayan Monal (035& 035A). Male female both were there. It is a Himalayan Bird of an altitude of 2000 mts. above. The male is an attractive and multicoloured bird where as the female is comparatively dull in appearance. They forage over hill slopes all through the day and roost at darkness. Keeps on digging on the grounds in search of food, consisting of small invertebrates and soft roots. They make their nest on the ground during April-May and lay 4-5 eggs. Chicks come out in 4 weeks and become independent in around 6 months. They are monogamous in nature. Monal is the National bird of Nepal. In some places of Himalayas, poaching is a threat to the bird for meat and its colourful feathers too.

Just moving after 50 meters another precious bird Koklass Pheasant (036) were there. Both these birds are high altitude birds of Himalayas and are resident of deep forest and inaccessible areas.

The Koklass Pheasant is a large sized bird (60cm app.) of the Himalayas and available in a large area from Afghanistan to China. The male birds are bright and colourful whereas the females are duller.  They roam and live in pairs and are monogamous in nature. During April-May, the female lays egg and chicks come out in 4 weeks. They are vegetarian in nature and feed on seeds mainly. Average lifespan of the pheasant is about 12 years. There are 9 types of Koklass Pheasant available in the world.

A resident bird of the Himalayas, the male bull finch has orange colour and the female has Yellow on their heads. They are of the finch family and feed on seeds. Make nest inside bushes. Prefer to stay in colder climates . Found in himalayas and adjacent places.

Hill Patridge is a small patridge and highly secretive bird of the Himalayas. It goes on calling for a long time from the hidden places but seldom comes out. They forage on the ground in pairs and groups and search for food on the ground. Mainly seeds of different plants.

It was the day of our return from Garhwal birding trip and 10 hours journey was to be completed for reaching Haridwar for our Train to New Delhi. And for the boy, driving the car, it was a 20 hours drive for coming back home after shifting us. So we moved immediately. A mind blowing trip ended with everlasting memories of the Himalayas. Shimla to Kinnaur Shimla to kinnaur road trip is all about some exquisite and stunning scenery of the Kinnaur valley in Himachal Pradesh.In this blog
Read More