Menu
Bird Watching From Our Terrace Rajarhat is a popular birding destination of modern Kolkata. It can be easily reached by road from Bidhannagar Railway Station or New Town bus stand. But owing to the pandemic, wildlife lovers are not able to spend much time with nature openly as earlier. So are the birders like me. But, I must thank Mother Nature for bringing home the love which I was missing for the last few months. From the 10th floor terrace of our Rajarhat apartment, we can still see vast greeneries away from the concrete jungle where winged friends fly around with no human fear. When my eyes open at the morning call of a winter migrant, what else you need to relish a relaxing day at home? Nowadays, bird watching from my terrace has become more of an addiction than pastime. Here are some of the feathered friends which recently visited my neighbourhood in last five months. I was fortunate to capture candid photographs from my balcony. Shikra (or Little Banded Goshawk) is a brilliant preying bird which mostly feeds on smaller birds or snakes. Size is not that large, but their speed of attack is very high compared to other birds of its family. Shikras are widely found in Asia and Africa in different species. This one which visited me was a juvenile one, some three days ago. Another raptor which often sits on our terrace is a Black Kite. It is one of the largest predators which scavenge at the right opportunity. Rusty brown in colour with a forked tail (triangular) is its identification mark. We often see it gliding up the sky and searching for food. During early winter months, it rests on our terrace for long hours. Nevertheless, its whinnying call is too shrill to ignore. A pair of Coppersmith Barbets and a Blue-Throated Barbet is our daily visitors nowadays. It is a small crimson-breasted bird of Asian barbet family, feeding on small insects. Its colourful body is very eye-catching and so is its metronomic call, sounding very similar to a coppersmith striking heavy metal with a hammer.  Due to their camouflaged body, it is difficult to spot in the greens. A few weeks back a family of Asian Open Bill Stork took refuge on our garden treetop. This large sized wading bird is mostly found near waterside areas but due to a large pond near our house, it had chosen our garden perhaps. From the dusty wings they seemed to have travelled a long distance. Their beaks are very distinctive in shape which never closes. This allows them to easily break snail shells, their common fodder. Amur Wagtail, also known as White Wagtail, is a beautiful songbird which is a winter visitor in our area. During this time of the year it stays at one of the trees in our car park and keeps singing continuously, calling for partner. Due to quick stamping of the tail, it can move also very fast on ground. Asian Pied Starling is a small bird, commonly found in large numbers at lower heights. A day back one of it has given birth to three beautiful babies in our balcony. My afternoons pass watching the mother care after a day-long hunt. My eyes often open at the early morning calls of a Black Drongo. It is a common resident of metro cities and is quite a brave bird, as with time they have become used to human nuisance. It has a triangular typical tail with a glossy body colour which anyone can identify from a distance. Mostly seen perching on shrubs, it feeds on small insects and nectar. 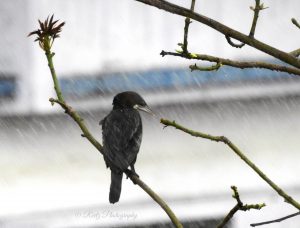 It was raining quite heavily some days back when I was stunned to spot a Little Cormorant bird sitting on top of our garden tree. It was drenching in water and playing with the winds. An underwater swimming bird by instinct, I am still not sure how and why it chose our garden as a resting shelter. There is no substantial water body in proximity either. The last but not the least, a Yellow-footed Green Pigeon which resides inside the banyan tree beside our complex, is my personal favourite. It mostly feeds on the red fruits of the same tree but is frequently seen with its partner on our garden treetop, especially during early winter mornings. There are lots of other pigeons which stay in vicinity but this colourful pigeon wins my heart every time I see it around.