We were travelling to Pahalgam, the valley of shepherds, on road from Srinagar. At the outskirts of the hamlet, a big green board welcomed us. ‘Pahalgam’ literally means ‘The First Village’. It was perhaps named, as per a common mythical belief that during Lord Shiva’s way to Amarnath Cave, this small village served as His first resting point. He had performed a rigorous meditation for many days before heading onto His heavenly abode. History of Pahalgam depicts an interesting trend with the change in kingdoms. Until 1346 AD, Pahalgam used to be a rich Hindu kingdom; later it was captured by the Muslims led by Shams-ud-Din. Centuries later during 1586, when Kashmir was conquered by Akbar, Pahalgam was seized under the Mughal Empire. After the Battle of Plassey in 1757, it was further attacked by the Afghans and was temporarily annexed to Afghanistan until Sikh ruler Ranjit Singh captured it from Ahmed Shah Durrani. In 1846, the British took it back from the Sikhs and sold to Jammu’s Hindu Maharaja Gulab Singh against a hefty sum. Since then, Pahalgam has a mixed lineage of Hindu, Sikh and Muslim residents. Presently it falls under the administration of Anantanag District of Indian state of Jammu & Kashmir. 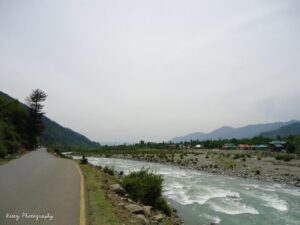 The average elevation of Pahalgam is 9000 feet, located centrally in the Lidder Valley. It marks the confluence of two significant Trans Himalayan rivers – the Seshnag stream and Lidderwat. The hill station is thus quite popular among tourists, adventure seekers as well as pilgrims for its geographical significance, natural splendour and comfy weather. Just at a pebble throwing distance there was a river and if you look up from there were ranges of snow-peaks. You just need to carry a pocket camera to take snaps – wherever you click it’s bound to be the best one ever! However, here are top 5 attractions in and around Pahalgam for tourists. Imminent stormy night tempted us for a deep sleep. We jumped into depths of dream under the furry blanket. Reetwika’s Travel Tip: For detailed information about the above places, visit the individual articles available in Tours and Journeys under Jammu & Kashmir category.